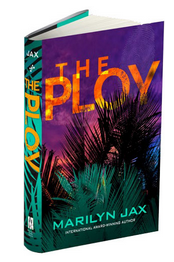 The Ploy, has been named winner of the Best Fiction category of the 2018 Best Book Awards and also Best Mystery in the Beverly Hills Book Awards. The book has also won recognition in five other award programs, including the Benjamin Franklin and Eric Hoffer awards. The Ploy  begins with the death of protagonist Claire Caswell’s best friend in a horrific car crash in Miami. She refuses to believe the police findings that driver error was to blame, and is convinced that what happened to Charlotte was no accident.

So, Caswell and her longtime partner, Gaston “Guy” Lombard, set out on a painstaking investigation with only a hunch to go on and some seemingly random clues found at the crash scene. They soon learn Charlotte isn’t the only woman who bought a car at the same Miami Porsche dealer to die in an accident shortly after driving off the lot in her new vehicle. The plot thickens.

Jax says the story, which took a little more than two years to research and write, was inspired by a conversation she had with one of her fans who works in the automotive industry. “He had said to me, ‘You know, the person who manages the finance department at a car dealership gets so much information about a buyer, he or she can do major damage if they are unscrupulous.’”

The Ploy is the fifth book in the Caswell & Lombard series Jax kicked off in 2007 with the release of The Find, a story set in Miami, the Caribbean and London. Jax is also the author of Road to Omalos, set in Crete; Sapphire Trails, set in Montana; and Never in Ink, set in Italy, Switzerland and France. Combined, her novels have now won 32 national and international book awards.

“I am humbled to have received such amazing recognition for each book in my Caswell & Lombard series,” said Jax, who is currently hard at work on Book 6 in the series. I Heard Everything is set for release in 2019.
For more information about Marilyn Jax and her books, go to www.MarilynJax.com.