Third National Tour for Cooked to Death: Volume II - Lying on a Plate Continues in Sept. 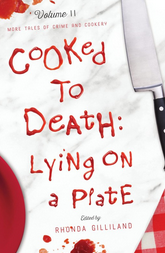 A lot of self-published books sell well when they first come out, only to have sales go flat a few months later. That has not been the case for Cooked to Death: Volume II - Lying on a Plate.  With the help of RMA Publicity, a full year after its release, the book has stayed in the spotlight.

Gilliland will also be making an appearance at the World Mystery Convention, Bouchercon, which this year is being held in St. Petersburg, Fla., from Sept. 6 - 9, and then on Sept. 14 she will be at Dunaway Book in St. Louis.

The book's first tour took place in Fall 2017 at locations in Minnesota. The second tour happened in Spring 2018 and involved stops in North Dakota, Montana, Oregon, Utah, Iowa and Nebraska.

In addition, shortly after the book's Oct. 2017 release, RMA Publicity secured a mention in the St. Paul Pioneer Press. Articles have also apppeared in the hometown newspapers of several of the authors of the foodie anthology (Enterprise, Mankato Free Press, Union Times).