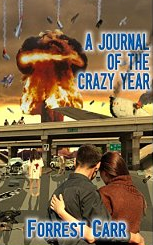 (Tucson, Ariz.) - The best books are those written by authors who have experience with the topics they are writing about. You may wonder how that’s possible in a story about a zombie apocalypse.

“Well, I was a television news director for 15 years,” laughs Forrest Carr, author of A Journal of the Crazy Year (Premonition Media, 2015, $13.99), a book about a world gone mad. Kirkus Reviews says the novel “has a truly unconventional ending that makes for a worthy trip” and Publisher’s Weekly says it “is stuffed with untrimmable, character-driven, cogent dialogue, and Carr’s sincere investment in the concept of people groping their way through hell on Earth.”

A Journal of the Crazy Year begins with the main character, John Cruz, waking up in a mental hospital. He has no memory of how he got there, and soon learns he has been there for three years. The story follows John as he is released from the institution into the care of his wife, Maria.

It isn’t long before John comes to the realization that Maria is one of the few “sane” people remaining in the world who has not turned into a zombie. The “insane,” himself included, seem to be immune to the malady that threatens to destroy humanity. The odds may be against him, but John vows to do whatever it takes to protect the love of his life from certain doom.

Carr took a sabbatical from a 30 plus year career in television news in 2013 to try his hand at fiction writing. “It’s something I had always wanted to do but never had the time for when I was working,” says Carr, who self-published his debut novel, Messages, a frank and honest portrayal of the quirky side of the news business, in late 2013. Kirkus Reviews calls the book “an accomplished debut novel.”

Pleased with the success of his first work of fiction, Carr quickly got started on book number two. He released A Journal of the Crazy Year in early 2015. “My true love has always been science fiction, and I wanted to see if I could write a novel in that genre,” says Carr. He came up with the idea for a science-based zombie story by examining trends that are happening in every day reality.

“As a veteran news person I certainly have noticed over the years that bizarre often violent human behavior is becoming more and more and more common,” says Carr. He cites incidents ranging from the hyper violent—a naked man in Florida who jumped on a pedestrian and ate the man’s face off—to the truly bizarre—people urinating on passengers in train stations.

“It’s not your imagination. Strange things have been happening. It raises the question, where is the human race going? Are we becoming collectively insane as a species, and if we are, what is going to happen? This novel pulls all those threads together,” says Carr.

There is also a religious element to the book. John hasn’t had a very good relationship with God over the years, but he still asks Him for just one more good day with his wife. Will he get it?

Unlike most science fiction books that tell stories readers know can never happen, Carr points out as strange as it sounds, the zombie apocalypse he describes is based on reality.

In the book, Carr also makes mention of the possibility that the strange behavior is being caused by a comet making a close approach to Earth. “Everything I say about comets is fact based. There is a lot of real science in the book,” comments Carr.

Copies of both A Journal of the Crazy World and Messages are available for purchase on Amazon.com. Visit the author’s website, www.forrestcarr.com for more information. 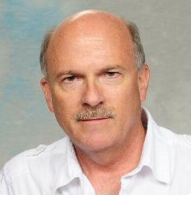 Forrest Carr graduated from the University of Memphis with a Bachelor of Arts degree in Communications in May of 1980. After a brief stint as a radio reporter, he switched to television, beginning as a copy writer and fill-in reporter before moving into newscast producing.

He has received or shared credit in more than 90 professional awards, including a Suncoast Regional Emmy for investigative reporting, two regional Edward R. Murrow awards for investigative reporting, a Walter Cronkite large-market station award for excellence in television political journalism, and most recently, a national Edward R. Murrow station award for best website.

Carr is author of the crime/newsroom novel Messages and the sci-fi novel A Journal of the Crazy Year, and is a co- author of Broadcast News Handbook, a college textbook published by McGraw-Hill, now in its fifth edition.

Carr resides in Tucson, Arizona with his wife Deborah and their two cats Ellis and Mina, a.k.a. Butthead 1 and Butthead Also.