When You Suddenly Become a Caregiver

New Book Offers Advice for Those Learning to Float 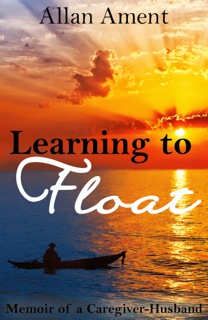 By Rachel M. Anderson, This email address is being protected from spambots. You need JavaScript enabled to view it.

(Whidbey Island, Wash.) – As their full-time careers started winding down, Allan and Deloris Ament of Whidbey Island, Wash., a small island off the coast of Seattle, had grand plans.  “We were going to volunteer for causes we believed in strongly, travel and spend time with friends and family,” remembers Allan.

Deloris, who had recently retired from a long career as the art critic for The Seattle Times newspaper, was planning to work on a novel and freelance for paper she used to write for full-time. Allan, who had worked as a criminal defense attorney, higher education administrator and instructor, and day spa manager, planned to work as an online instructor for the University of Phoenix.

Their plans came crashing down around them, however, in August 2005 when Deloris suffered a stroke. In his recently published book, Learning to Float: Memoir of a Caregiver-Husband (Booktrope, 2014, $13.50),  Allan chronicles the journey he suddenly found himself on that fateful day. He became one of the 65.7 million Americans the National Alliance for Caregiving estimates are caring for a family member who is ill or disabled.

“The day Deloris suffered her stroke, I knew something was terribly wrong,” he explains. “She could speak but was not making sense. I got her in the car and headed for the ferry to take her to a hospital in Everett.” “On the way there her eyes rolled back in her head and she lost consciousness. When she came back, it was clear she was in trouble.”

When they arrived at the hospital, Deloris was rushed into the emergency room. A short time later the doctor confirmed Allan’s worst fear. “Your wife’s had a stroke,” he was told. Life would never be the same again.

According to the National Stroke Association someone in the United States suffers a stroke on average every 40 seconds. A stroke is defined as the sudden death of brain cells in a localized area due to inadequate blood flow. Signs a person may be suffering a stroke include having one side of the face droop when they smile, having slurred or strange speech, and being unable to hold both arms in the air.

After suffering the stroke, Deloris spent ten days in the hospital before being moved to a skilled nursing facility and eventually to an in-patient intensive rehabilitation unit. Two months passed before she was able to return home. When she did, she had to depend on Allan 24/7. “I don’t think I gave it any conscious thought at all that I was going to have to be a caregiver. I certainly had no training for the role. It was more like my wife needs help and here I am,” says Ament.

In the book’s preface, Ament recalls his first childhood swimming lesson. Like most beginning swimmers, he had to first learn how to float, to relax atop the water, before learning to swim. “Same goes for the move from husband to caregiver. To succeed, to survive, I had to learn to float all over again,” he says. “When it came time to select a title for my book, Learning to Float seemed appropriate.”

Ament had to figure out the best way to do a lot of things for Deloris—get her in and out of bed, to and from the bathroom, help her get dressed, etc. “We had joked early on in our relationship that we weren’t spending enough time with each other except when we were on vacation. After the stroke we were together 24/7. Maybe we should have been clearer in what we wanted.” says Ament.

Fast forward a decade to 2015. Deloris’s condition has improved dramatically. She still needs help with many of the tasks of daily living, but is able to do far more on her own than she could early on in her recovery.

“I have learned so much during my time as a caregiver that I felt a duty to share my knowledge with others, which is why I wrote the book,” says Ament, who adds that much of the content came from his journal and e-mails he sent to friends and family updating them on Deloris’s condition over the years.

The book ends with this email Ament had originally sent out on Jan. 17, 2010. “While I haven’t yet gotten back all of her, I see increasingly more and more of the old Deloris returning. I am extremely grateful. And so, we move into the future with optimism and hope.”

In addition to sharing his personal story, Learning to Float also lists many resources, including books on caregiving, memoirs by caregivers, books and websites where people who find themselves thrust into a similar situation can find help and guidance.

Ament also included his own personal “guidelines for floating,” which include the following:

* Take care of yourself, first and foremost. Exercise. Eat well. Take naps. Follow a spiritua practice, whatever it might be.

* Ask for help. A specific request is a gift to others.

* Laugh. Find the humor in whatever is happening.

* Be thankful for what you have rather than mourning what you do not have.

“Early on in Deloris’ recovery, I got mad a lot even though I knew none of what was happening was her fault. I hope people who read my book will make a conscious effort to be more compassionate than I was and practice patience,” says Allan.

“Have patience. It is not as if you have an alternative,” adds Deloris.

The reviews for Learning to Float have been laudatory. Riane Eisler, author, The Real Wealth of Nations, says, “A moving, sometimes heartbreaking, sometimes funny, always unabashedly honest account of the resilience of two people suddenly faced with what Ament calls ‘a new normal.’”

Copies of Learning to Float are available for purchase online at www.amazon.com and www.barnesandnoble.com, and can also be ordered through your local bookstore.

After successful careers as a criminal defense attorney, higher education administrator and instructor, and day spa manager, Allan Ament now enjoys retirement with his wife, Deloris, an award-winning journalist and author.  The Aments live on an island in Puget Sound, north of Seattle, where in addition to writing and being his wife’s primary caregiver, Ament serves as board chair for the Northwest Institute of Literary Arts.

His work has previously appeared in academic, professional and literary journals, and is included in the anthology, Being: What Makes a Man, published by the University of Nebraska Gender Programs in 2015.

EDITOR’S NOTE:  To request a review copy of Learning to Float: Memoir of a Caregiver-Husband, and/or arrange an interview with Allan Ament, contact Rachel M. Anderson, Publicist, at 952-240-2513 or This email address is being protected from spambots. You need JavaScript enabled to view it..