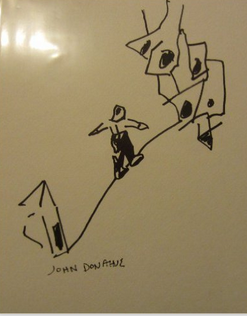 (Minneapolis) - The next time you drive into Downtown Minneapolis, or any city for that matter, and see a homeless person begging for money, how will you react? Some people will roll down their window and give the person a little cash. Others will look away and drive off.

Bruce Ario of Minneapolis will often feel tears coming to his eyes when he comes upon a homeless person. He is in his 60s now, but when he was in his 20s, he was on the streets himself.

Homelessness is a bigger problem in Minnesota than many people think. According to a study done by Wilder Research in 2015, on any given day, more than 9,000 people in the state are homeless. There are many contributing factors as to why people end up on the streets. Among the most common, job loss, domestic disputes, and as was the case for Ario, mental illness.

“When I was attending the University of Minnesota as an undergrad, I also worked as a bartender at night. One night I left work drunk, drove under the influence and crashed into a light pole,” he said. Ario sustained a head injury in that crash which would eventually change the course of his life. He tried hard to pull things together and was even able to study two years at the U of M Law School before things became unmanageable.

“My parents eventually kicked me out of the house and I became homeless,” said Ario. He shares his story, which is slightly fictionalized, in the memoir City Boy, originally released as an ebook on amazon.com in Jan. 2012, and re-released by Beaver’s Pond Press of Minnesota as a paperback in Aug. 2015.

City Boy begins with Ario’s early memories of the love he had for the city of where he grew up, Minneapolis, and of the experiences that shaped his early days. “Most of the time, I was drinking in what the city had to offer —that is, the movement or action of the people and the culture,” he writes, in the section of the book where he shares his memories of experiences in elementary, middle and high school. Of the crushes he had, his experimentation with drugs and alcohol, what he thought of the Vietnam War, etc.

The second half of the book focuses on what what life was like after his accident. “I was never the same after that,” writes Ario, who explains how his way of thinking about the city became more desperate. It was no longer romanticized.

In the book he writes about suddenly smelling the garbage in the streets, observing the grass that had not been cut and his growing awareness of the chaos in the streets. He also shares what happened the day he was arrested for taking off all of his clothes in a crowded skyway.

“It was my last desperate plan that all the good people would follow me by taking off their clothes, and we would all be free and have uninhibited sex,” writes Ario, who a short time after that incident was diagnosed with the mental illness, schizoaffective disorder. According to Mayo Clinic.com the illness is defined as a condition in which a person experiences a combination of schizophrenia symptoms — such as hallucinations or delusions — and mood disorder symptoms, such as mania or depression.

Along with the diagnosis came Ario’s salvation. His doctor put him on medication, and before long he was able to secure a job, began running marathons and develop relationships that he continues to nurture today.

He also made the decision to follow his passion—to become a writer. “My motivation for writing this book was to help others. To write a story that would give hope to people. I experienced very dark moments in my life, but there was always light at the end of the tunnel. I’ve been able to find more and more of that light every day in my struggle,” said Ario.

City Boy is available for purchase as a paperback at www.bruceario.com/cityboy.html, or as an ebook or paperback from www.amazon.com.

Bruce Ario made a decision to be a writer as he met with another homeless man in the library in 1983. Previous to being homeless, Bruce had completed two years of law school.

The man asked, "What do you want to do with the rest of your life?" Bruce thought and then wrote something that has been in his heart since childhood, "I want to be a writer." The man smiled and then said, "Go do it.”

Among other things, Bruce was seeking justice. He learned a little about how the law students viewed it, but he was on a different mission than most of them. He was going to tell stories in his poems, plays, and novels. He hopes to tell stories that are inspiring, ones where justice is served with resolution and results.

He has a tendency to write on themes of recovery where the story takes us to the depths before bringing us to a new direction and understanding. Ario wants the reader to grasp something substantial and sustaining.

“These are get rich quick stories; not with money, but with emotions. His unique experiences and universal insights bring us a calming relief,” he said.

EDITOR’S NOTE: To arrange an interview with Bruce Ario, or request a review copy of City Boy, contact Rachel M. Anderson, Publicist, at 952-240-2513 or This email address is being protected from spambots. You need JavaScript enabled to view it..