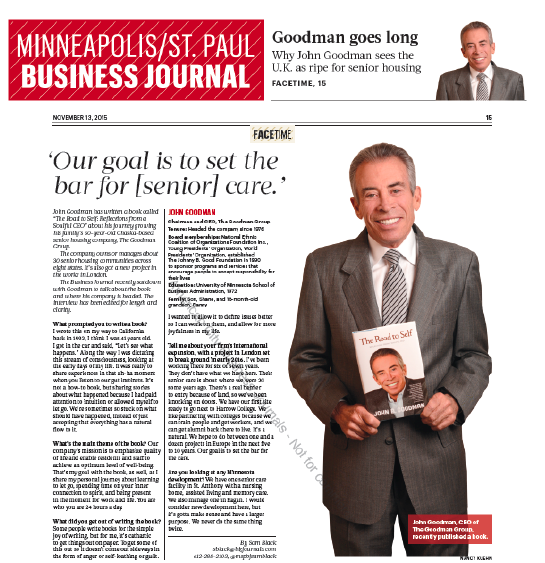 There is a story about Twin Cities businessman John B. Goodman's new books in the Nov. 13 edition of the Minneapolis/St. Paul Business Journal.
In the Story, "Facetime with Goodman Group CEO John Goodman," reporter Sam Black asks Goodman what prompted him to write his books, The Road to Self: Reflections from a Soulful CEO and Moments Matter: Everyday Inspiration from a Soulful CEO, and what is new at his company, The Goodman Group.
And the week of Nov. 9, The Road to Self received a very favorable review from Kirkus Reviews, which says in part, "...this book offers a sweet, succinct discussion on how to live a better, happier life." The entire review can found found on the Kirkus Reviews website.
Books are available for purchase at www.thesoulfulceo.com.

The Adopt-A-Pet Shop is Featured on KSTP Television on Nov. 12

Minnesota's biggest giving day of the year, "Give to the Max Day," is on Nov. 12 and with RMA Publicity's help, The Adopt-A-Pet Shop, a nonprofit in Plymouth, got some much deserved attention from the media. KSTP's morning show reporter, Jennifer Ann Wilson, stopped by The Shop this morning and got pictures of the pajama party underway to raise awareness about the need to help homeless animals. Here is a link to the story that aired on KSTP's 6 a.m. newscast.

The Adopt-A-Pet Shop is hoping to raise $10 for each of the 1,000 animals the nonprofit has helped find homes for since opening their doors in 2012. Thanks to the media exposure, they are well on their way to reaching that goal.

Learn more about the nonprofit at www.theadoptapetshop.org. Here is a link to their official page on the Give to the Max MN website: https://www.givemn.org/organization/Sos-Rescue-Relief

National Launch for "Drop the Puck, Shoot for the Cup" Featured in a Column in the Daily News in Philadelphia

It's off and running for the author and illustrator of Drop the Puck: Shoot for the Cup.

They launched their book on Nov. 7 with an appearance on the FOX 9 morning news, followed by the official launch during the fundraising gala, "A Night to Bel13ve" at the RiverCentre in St. Paul.  Tonight, Nov. 12, they have another launch event, this one in Philadelphia prior to the Flyers game against the Washington Capitals. The launch is previewed in Jenny DeHuff's column in today's Philadelphia Daily News.

Drop the Puck: Shoot for the Cup is a children's chapter book about hockey set during tournament time. The book features a character named “Ace,” who still gets around in a wheelchair two years after having been checked from behind at the same tournament the main characters in the book are competing in. The storyline is based on what happened to Jack Jablonski, who was hit from behind during the Minnesota High School Hockey Tournament on Dec. 30, 2011, leaving him paralyzed. The injury ended his high school hockey career and hopes for playing pro in the future.   The media is beginning to pick up on the story. In addition to the author and illustrator's appearance on FOX 9, there  have been stories in the Nov. 4 edition of The Detroit Lakes Newspaper and the Nov. 3 issue of the Lakeshore Weekly Newspaper. Several other newspapers throughout the state are planning stories as well.
Plus, there will be stories about the book on the sports chanels FOX Sports North and ESPN. Both media outlets covered the launch party. In addition, a story is planned on the soon-to-be launched website, www.stateofhockey.com, and this  Mon., Nov. 9, author Jayne Jones was interviewed on KBRF-AM in Fergus Falls, Minn.
Drop the Puck, Shoot for the Cup has been endorsed for its hat-trick scoring storytelling by NHL greats Alex Ovechkin, Coach Dave Hakstol, Matt Cullen and Mike Hickey, President of the American Special Hockey Association. The national book launch will be hosted by the Philadelphia Flyers during the team's Nov. 12 game against the Washington Capitals.

Learn more about the book or pre-order your copy at www.officialadventures.org. 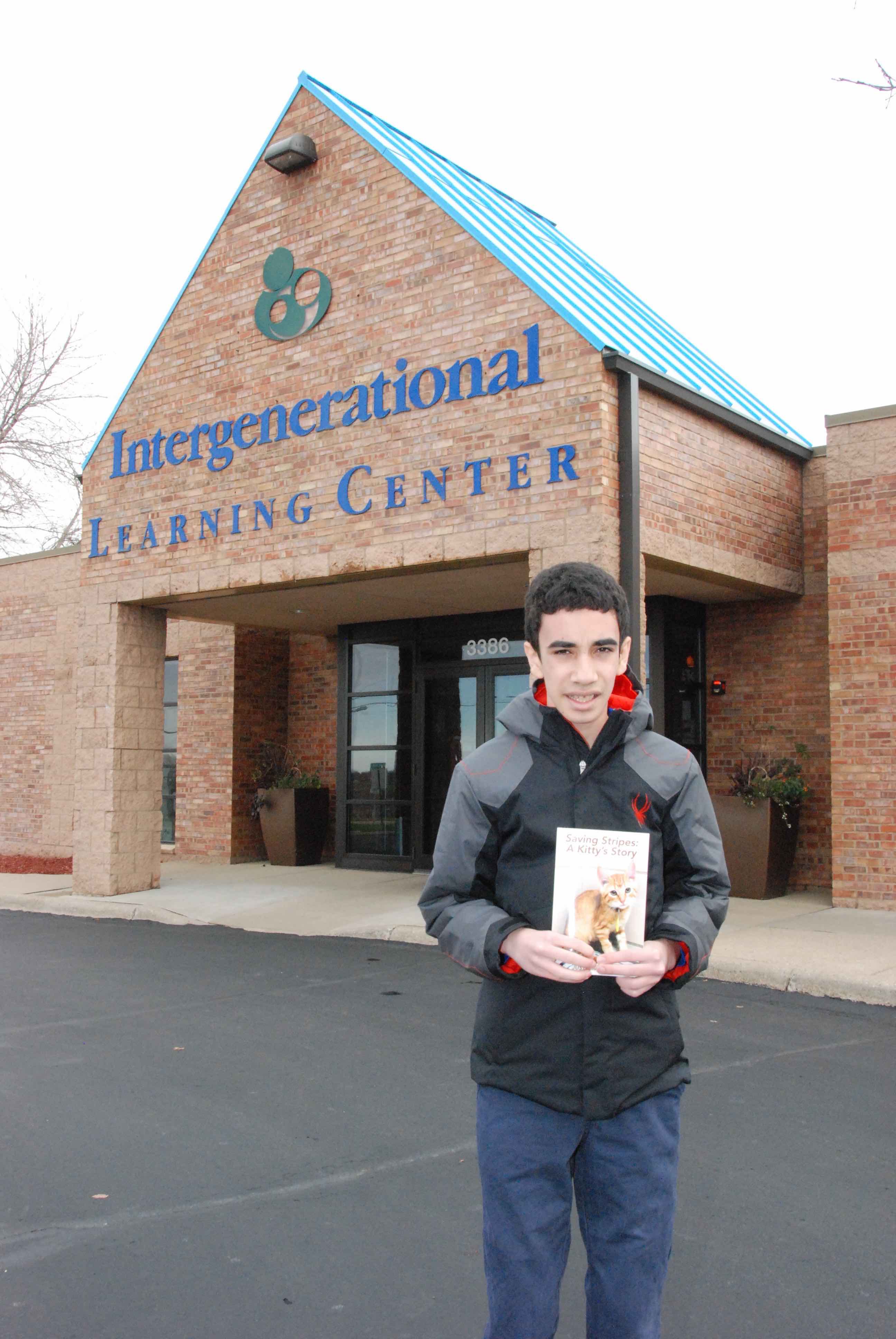 Justin M. Anderson shared the story behind his new book, Saving Stripes: A Kitty's Story, with kids and seniors at The Intergenerational Learning Center in Eagan, Minn., on Nov. 12. The Center is owned and operated by The Goodman Group, which recently purchased 25 copies of the book and distributed them to its Intergenerational Learning Centers in Minnesota and Florida.
100 percent of book sales proceeds are being donated to S.O.S. Rescue Relief, Inc., of Plymouth, Minn. The organization's mission is to save as many animals from euthanasia as they can.
Books are available for purchase online for $10 at https://www.createspace.com/4931704. Learn more about S.O.S. Rescue Relief, Inc., at www.theadoptapetshop.com.