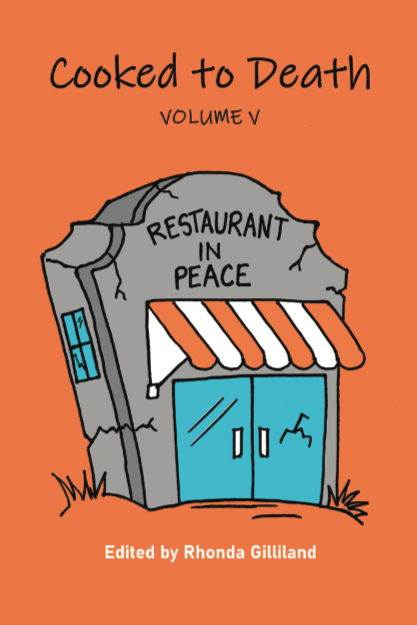 (St. Paul) – The next time you walk into a restaurant, take a good look around. What do you see? If you were one of the writers whose work is featured in the latest edition of the Cooked to Death mystery anthology, you may “see” a lot of things.

Like a police detective grabbing a glass used by a man suspected of murder to hopefully tie him to a crime scene (“Murder Leaves an Aftertaste” by Renée Valois of Roseville, Minn.), or a woman beside herself with anxiety after murdering one of the busboys who works at her restaurant (“Champagne Wishes and Caviar Dreams” by M.E. Bakos of Coon Rapids, Minn.)

Readers will find these stories and more in Cooked to Death Volume V: Restaurant in Peace, which features the work of 14 talented writers from Minnesota, South Dakota and Pennsylvania. Each story is accompanied by a recipe provided by a restaurant.

Among those included, Mango Walleye from Tavern on Grand in St. Paul, Minnesota; Chimichurri Steak Sandwich provided by Northern Lake Tavern & Grill of Chisago City, Minnesota; Kotopoulo Lemonato/Riganato with Potatoes from The Naughty Greek; and Dunsmore’s Delight, a cake recipe provided by the owner of Crooner’s Lounge and Supper Club in Minneapolis, Minnesota.

The book, as well as its predecessors, was edited by Minnesota foodie Rhonda Gilliland, who came up with the idea for the Cooked to Death series back in 2015. “In talking to people I know in the mystery writing community, I discovered that many of the authors are seasoned cooks as well. Great food and great authors go together,” said Gilliland, whose story, “It’s in the Blood,” is in the book. It’s about a Greek restaurant owner who decides to hire a hitman to kill his wife.

“Seed of Doubt” by Cheryl Ullyot of Minneapolis is about a flight attendant who is so angry at the co-pilot who scorned her that she plots to kill him by tainting his dinner; In “Window Dressing,” by Joel Arnold of Savage, Minn., a police officer investigating a murder scene unknowingly taints the crime scene; In “Killer Tacos” by Chris Norbury of Owatonna, Minn., a food truck owner gets sweet revenge after the competition tries to run her out of town; and in “Out of Whack Event” by David Housewright of Roseville, Minn., a woman makes herself the center of attention in a most unusual way.

The final story in the book is “What Cooks Do – A Culinary Essay” by Erica Christ of Minneapolis. It honors cooks everywhere for their artistry.

Rhonda Gilliland is the past president of Sisters in Crime and a member of the Midwest Independent Publishing Association (MIPA).

She came up with the idea for the Cooked to Death anthology in late 2015, and put out the call for submissions. Of the 40 stories submitted for the first volume in the series, 17 made it into the book published by Nodin Press in Aug. 2016.

In addition to her work with the Cooked to Death anthologies, Gilliland also wrote and produced the independent film, “Come and Get Your Love,” a contemporary native American film about women who go missing on certain Indian Reservations. The film was inspired by a trip she and a friend took to a Pow Wow in South Dakota.