Setting the Record Straight About Life for Women in Saudi Arabia 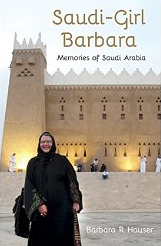 (Minneapolis) – Barbara R. Hauser of Minneapolis used to be fairly confident there was little respect for women in Saudi Arabia. After all, the country’s customs appear very chauvinistic by western standards.

Women are required to wear an abaya (full black covering) in public. In addition, they cannot drive and they are subject to segregation. There are separate lines for men and women at fast food restaurants, separate entrances at government buildings and universities, and they are not allowed to try on clothing at stores.

Despite these conditions, in her book, Saudi-Girl Barbara (Mesatop Press, 2015, $14), Hauser makes a point of explaining how wrong her early assumptions were. “I used to be certain that there was very little respect for women in Saudi Arabia. During my first trip there in 2003, I found out how wrong I was,” she said.

Hauser is an internationally recognized advisor to global families. It’s a field she entered after years of working as a lawyer, representing wealthy clients. She began working in Saudi Arabia on a regular basis after accompanying her husband there when he was invited to be a guest medical professor at the King Khalid Eye Hospital.

“I distinctly remember attending a lecture early on where the male residents were all sitting in the front row and the female residents were sitting in the rows behind them. During the Question & Answer session, not only did many female hands shoot up, the men turned around and listened to their questions attentively,” said Hauser. Not exactly the kind of treatment—and respect for women—she was expecting.

In recent years, the rights of Saudi women have been incrementally extended. They are now doing more in the public spheres of work, education and politics than ever before. According to the United Nations, 60.5 percent of women over age 25 have at least some secondary education, 18.2 percent of women over age 15 are working and there are presently 30 women on Saudi Arabia’s Shura Council, which provides counsel to the King on issues important to the country.

Hauser has been to Saudi Arabia dozens of times in recent years. She says she has personally witnessed the respect the Saudi businessmen she works with have for their wives, sisters and daughters on a regular basis. In her book Hauser writes…

In the homes I see only pride in everyone’s accomplishments. The young females are getting degrees in architecture, business and law, which they can soon fully practice. They are also training for management positions in the family business (head of the female section).

“I have had a rare ‘insiders’ set of experiences there (Saudi Arabia)—and I wanted to share some of them,” said Hauser. “I hope the readers get a sense of how kind and interesting Saudi families are.”

Hauser isn’t only sharing her opinions through her book. She recently wrote a Letter to the Editor of the New York Times that was published on Feb. 16, 2015. In it she said, “I have consistently seen the respect given by the Saudi businessmen I work with, for their wives, sisters and daughters. Daughters are training as doctors, lawyers, architects, investment managers and business leaders. The men have invited me into their businesses and into their homes, hiring me to give them advice on better corporate governance and family asset management. Saudi Arabia is a very complex society, and one that is extremely important in the world. We would all profit from more interaction.”

Reviewers of Saudi Girl Barbara agree. Abdulmohsen Al-Touq, CEO, Al-Touq Family Office and Hauser’s first Saudi client said, “Barbara has written an honest and entertaining book of her insights into our culture. I will give copies to all my friends.”

Dawn S. Markowitz of New York, N.Y., said, “Hauser gives her readers a unique insight into the complex lives of Saudi men and women. Recounting the daily challenges she initially faced and the respect and acceptance she ultimately received, Hauser joyfully invites us to partake in her journey through Saudi society.”

Copies of Saudi Girl Barbara are available for purchase at www.saudigirlbarbara.com, as well as on Amazon.com. Print and Kindle copies are available.

EDITOR’S NOTE: To request a review copy of Saudi Girl Barbara, and/or set up an interview with Barbara R. Hauser, contact Rachel M. Anderson, Publicist, at 952-240-2513 or via email: This email address is being protected from spambots. You need JavaScript enabled to view it..