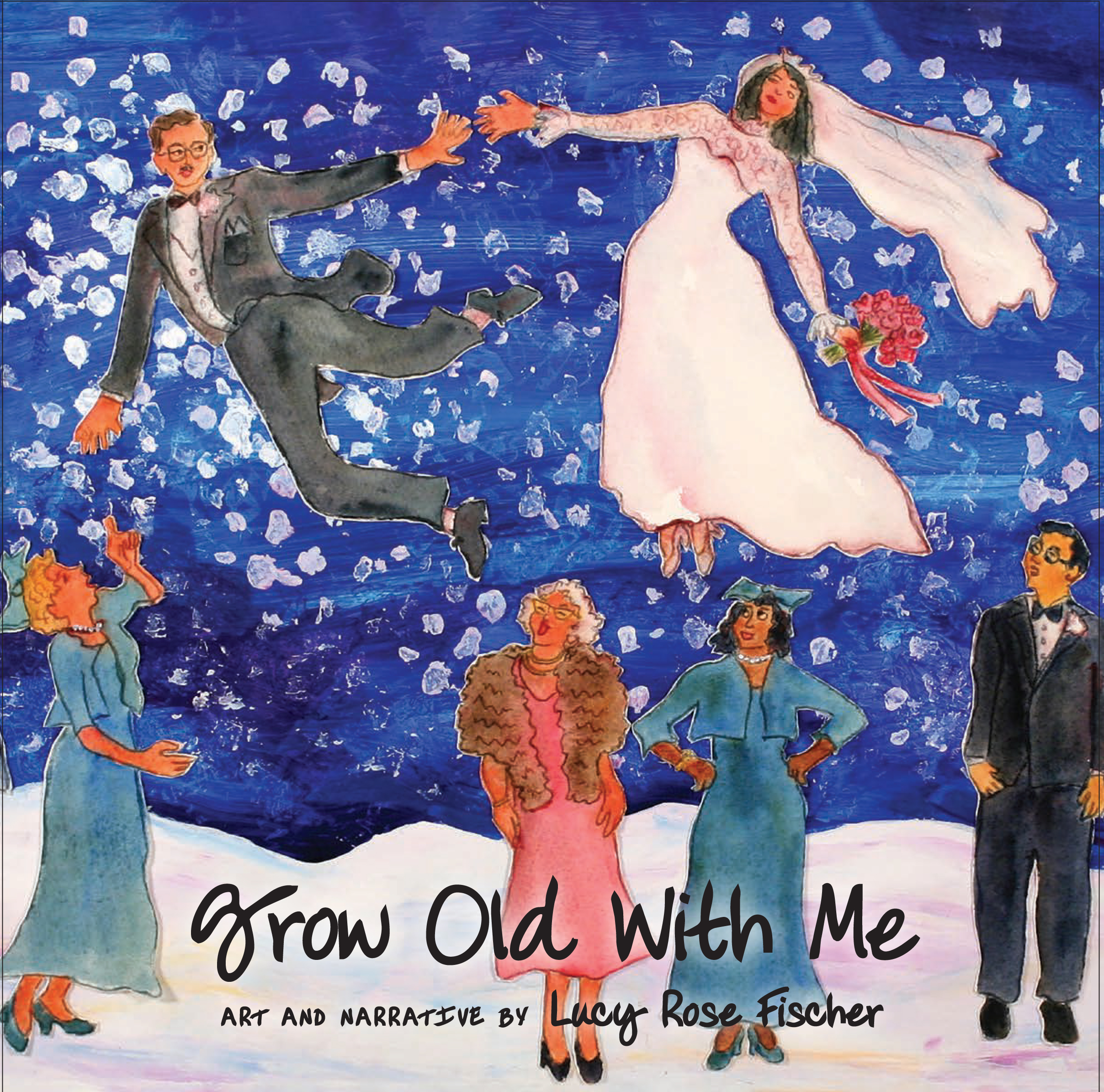 (Minneapolis) - What is the secret of a good marriage?  In her latest book, Grow Old With Me, author Lucy Rose Fischer tells the story of her long and happy marriage.

“It’s almost a miracle,” she says, “that this all worked out so well. We were so young and naïve when we met. What did we know when we chose each other as life mates?”

One of the early illustrations in Fischer’s colorful and whimsical new book shows the university campus where she and her husband met, with clouds of sex hormones hovering in the air. Grow Old With Me captures the journey of a marriage: from the beginning (falling “in-like” and then “in-love”) to the birth of their child (seeing cows as “sisters in milkship”) to their middle years (“high wire artists”) and through their older years (“we still have our dreams”). After more than 50 years, they look at one another with a sense of wonder and tender trepidation: “How did we get to be so old?”

In one of the most poignant images, she shows the couple, now grown older, as living with their “sweet ghosts.” You see the two of them from their backs, looking out onto their living room, which is filled with ephemeral figures, all their loved ones who have gone to the “other side”—parents, relatives, and friends.

Lucy Rose and Mark Fischer’s long-lasting marriage is an ongoing conversation—everyday talk, sharing ideas, expressing their love, consoling one another in sad times, and celebrating their “small triumphs and victories.”

This new book is a follow-up to Fischer’s last book, I’m New at Being Old, an award-winning vibrantly illustrated gift book. That book recounts her individual journey of growing older, as she wonders about the hazards of aging but also celebrates her richness of years.

Fischer considers herself a late-bloom as an artist. She had a long career as a researcher, with a PhD in sociology and a specialty in the study of aging. She directed studies and wrote books and professional articles. She always loved art, which was her passion on the side. So, she painted on vacations and had a habit of sketching during meetings.

She was almost 60 when she began her career as an artist. This is how it happened. She and her husband, Mark, were on vacation in Colorado. They went out for dinner at a fancy restaurant and shared a dessert called “Death by Chocolate.” Later in the evening, Mark was walking up a hill when he felt a squeezing in his chest and shortness of breath. He dismissed it—thinking it was altitude sickness. He didn’t see a doctor until two days later when they discovered that he’d had a mild heart attack and needed triple bypass surgery.

This was a turning point for both of them—a brush with mortality. Mark was determined to make the best of his life. He wanted to stay healthy—so he got serious about biking and did a multi-year bike ride down the length of the Mississippi River.

Lucy Rose decided that she needed to spend the next part of her life really focusing on art. Around that time, she taught herself how to paint upside-down, inside-out and backwards on hand blown glass. Since her life’s work had revolved around aging, she decided her focus would be on art that celebrates growing older. Her fanciful glass art has been featured in more than 100 exhibits and is on permanent display in private collections and public institutions. Twin Cities Public Television has even featured her in two of its documentaries: The Creative Power of Aging (2008) and Life Changing Art (2010).

If you ask Lucy Rose Fischer ‘What’s the secret of good marriage?’ she smiles and says, “Maybe, in part, it’s luck. But, of course, it’s more. A marriage requires effort—we invest time, energy and love in our marriage. We’re always growing, changing and developing, and our relationship evolves over time. We talk a lot, and we help and support each other as we tackle new challenges. Neither of us is perfect and our marriage isn’t perfect either—but it’s good and we’re grateful for each other.”

Mark had a long career as a financial planner with a specialty in retirement planning. He is also an author. His new book, Serious About Retiring, was published this spring. Since the Fischers share an interest in aging, they give talks together about aging. They have a series of talks scheduled for this fall.

For more information about Lucy Rose Fischer, including a listing of her upcoming events, go to www.lucyrosedesigns.com.

EDITOR’S NOTE: This feature article is available for your use copyright free and cost free. High resolution photography is available upon request for free as well. If you prefer to arrange your own interview with Lucy Rose Fischer, please contact Rachel M. Anderson, Publicist, at 952-240-2513 or This email address is being protected from spambots. You need JavaScript enabled to view it..