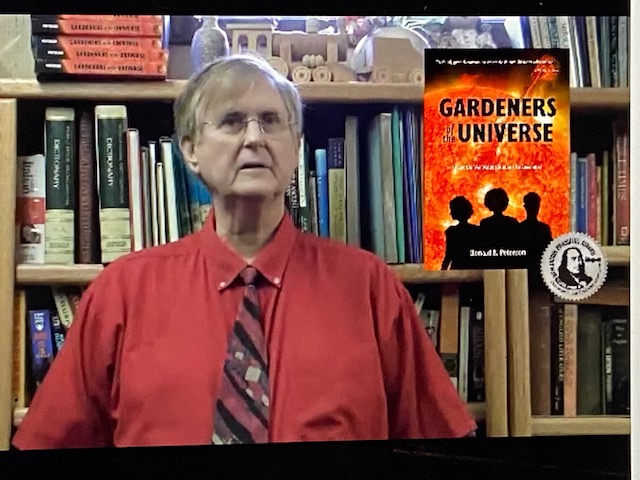 Former Honeywell executive Ronald E. Peterson’s debut science fiction novel has won national recognition. “Gardeners of the Universe” is a silver award winner in the science fiction category of the Independent Book Publishers Association (IBPA)’s 32nd annual Benjamin Franklin Awards program. The announcement was made during a virtual awards ceremony the evening of May 6.

“Gardeners of the Universe” showcases a futuristic world where what today may seem impossible has become a reality. The story begins in the not too distant future with the births of three children destined to change the world. Rianne grows up to lead biological revolutions. Dan creates sentient computers and guides the direction of human evolution. Sarah, in an age of information dissonance, becomes the most trusted individual on Earth, and convinces the world that they must change how and where they live. What sets the three apart from the rest of humanity are genetics and “gifts” that were no accident.

"After so much invention, emotion, second-thoughts, joy, and sheer work, an award like the Benjamin Franklin and solid national reviews make all my effort seem worthwhile. I hope it encourages everyone to take a peek at the future,” said Peterson, Honeywell's former Vice President of Technology.

“Gardeners of the Universe” was published by PTB Books and is available for purchase at www.ptbbooks.com, as well as Barnes and Noble and Amazon.

About the Benjamin Franklin Awards

More than 160 volunteer librarians, booksellers, and design and editorial experts – most with decades of book industry experience – judged the 1,697 entries submitted in this year's prestigious Benjamin Franklin Awards before settling on the 164 unique finalists.

"Winning an IBPA Benjamin Franklin Award says to bookstores, reviewers, and readers, 'This is one of the best books published in this category and it deserves to be noticed'," said incoming IBPA Board Chair Karla Olson. "The finalists, which reflect the highest standards of professionalism and attention to detail, celebrate the innovation and diversity coming out of today’s independent publishing community.”