Why Modern Science is Not Living up to its Promise 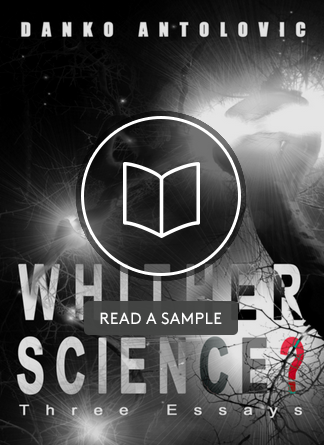 (Bloomington, Ind.) – Why is modern science lacking direction and significant progress, despite all the effort and resources that are expended on it? Danko Antolovic, a scientist and technologist of long standing thinks he knows the answer.

“It is because scientific research has become too self serving,” he says. Antolovic has spent most of his life working in the field of science and technology. While taking a break from his job in information technology, about three years ago, he started thinking long and hard about what science and technology means to him. He wrote three essays, which formed the basis for his latest published work, Whither Science? Three Essays.

The book, which was published in Feb. 2015, is written in non-technical language, and is intended to be easily accessible to general readers who are interested in science and its broader implications. The first essay explores what is wrong with science today.

In it he writes, “It is our thesis that the past half century or so has proven the bazaar-like approach to science a failure. This period has filled libraries with scientific publications to the point of bursting, while offering disappointingly little toward what has always been the underlying premise of the techno-scientific endeavor: betterment of the human condition.”

Despite all the effort placed on innovation and moving forward, the main technologies that drive this nation today are based on discoveries that were made 50 – 100 years ago. Think about that for a moment: science has not contributed a major improvement to human well-being  in more recent history.

Antolovic goes on to cite how humanity is no closer to curing cardiovascular disease and cancer than we were decades ago. He also points out that degenerative diseases of the body and mind continue to evade effective treatments, as do new infectious pathogens like HIV and Ebola.

Essay number two explores science’s relationship to the humanities—art, ethics and religion. Essay number three takes a look at what the future holds for science.

“With this collection of essays I try to lift the veil of fascination and magic from the practice of science. What drives people to devote themselves to scientific work? What fulfillment do they get from it, and at what price? What does society receive from scientists, in return for its unwavering support?" asks Antolovic.  "Furthermore, science has given us enormous power, and has changed our lives, but our human nature has so far remained the same. Is that a tenable prospect for the future, or is it possible that our limitations lie not in our knowledge and power, but in the depths of our mind? We have choices to make, and I am convinced that science will be able to guide us in making ourselves worthy of the power that it has given us.”

Now that the book is in the marketplace, Antolovic is hoping people throughout America  will read it to enlighten their own understanding of what science really is. Copies of Whither Science? Three Essaysare available for purchase online at Smashwords.com, as well as from BarnesandNoble.com. Apple’s iBooks, kobo, and OverDrive carry the title as well. The book is only available in eBook format and sells for just 99 cents.

About the Author
Danko Antolovic came to America from Croatia in 1979; he earned his Ph.D. in chemistry from The Johns Hopkins University in 1983, and the M.S. degree in computer science from Indiana University in 2001. His experiences include academic research, independent consulting, and work in private industry. He currently works in the Department of Information Technology at Indiana University in Bloomington, Ind.

In addition to Whither Science? Three Essays, Antolovic is also the author of Radiolocation in Ubiquitous Wireless Communication, which was published in 2010. This book describes the principles and design of a technology for rapid location of radio sources, as applied to Wi-Fi computer networks.

EDITOR’S NOTE: To arrange an interview with Danko Antolovic, or to request review copies of his books, contact Rachel M. Anderson, Publicist, at 952-240-2513 or This email address is being protected from spambots. You need JavaScript enabled to view it..