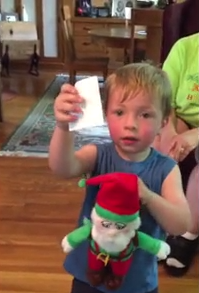 (Eagan, Minn.) – The Most Wonderful Time of the year will be here before you know it. What will you do to make it special for the kids this year? How about getting your son or daughter profiled in a brand new children’s book, or maybe getting an illustrated family portrait in time for the holidays?

These are just a few of the prizes being offered through the Kickstarter campaign for a new holiday-themed product being launched in the Twin Cities. From July 11, 2016 – Aug. 5, 2016, Sean and Catherine Green of Eagan, Minn., are trying to raise $12,000 to go towards publishing their new children’s book, The Story of Adventure Santa.

The book is part of the Adventure Santa kit they are planning to bring to market in time for Holiday Season 2016.  “Adventure Santa is about starting a fun tradition around the holidays that the kids can really get excited about,” said Catherine Green.

Adventure Santa is a plush doll with a long, white beard who carries around a backpack that holds notes to the kids about things the whole family can do together. “At the time I came up with the idea for Adventure Santa, Sean and I were both working crazy hours and we wanted to do something with the kids that would be memorable. We had seen other holiday traditions that have become popular for kids, but I wanted to focus our tradition on spending time together and creating fun holiday memories,” said Catherine Green.

The Greens started by writing down things they could do together as a family, like cutting down their own Christmas tree, decorating the house, going sledding and making cookies, and they put those ideas in a little backpack they made for a Santa doll. “I pretended those were Santa’s ideas for things we should do during the holiday season and this helped the magic come alive for the kids,” said Catherine Green.

“The kids absolutely loved it,” said Sean Green. “That year, Connor was asking us to bring Adventure Santa out again all the way into July.”

According to The History Channel, the Greens’ new tradition is a lot closer to what was intended for Christmas when the holiday began two millennia ago. From the beginning, popular customs have included such family-centered activities as decorating Christmas trees, attending church, sharing meals with family and friends, telling stories and exchanging gifts.

Sean Green is currently a stay-at-home dad, but he used to be a business development and product manager for a robotics company. “Right away I realized that Catherine’s idea had a lot of merit, and decided to start looking into how to bring it to market,” he said.

Step one was to partner with a company that manufactures plush dolls to create a unique Santa character who carries around a backpack that can be opened and closed. “It took close to a year to reach the point where we had a doll we liked,” said Sean Green.
While the Greens were waiting for the Adventure Santa doll they envisioned to come to life, they worked on the concept of who and what Adventure Santa will be.

“He is designed to work with the busy parent’s lifestyle, making it as easy and as flexible as possible to havefun and make memories that the kids and parents will remember for the rest of their lives.The online resource we are developing will help people come up with ideas and schedule adventures.”

“The Adventure Santa doll gets your kid(s) excited to go on the adventure (or activity that works with your schedule and budget) and enjoy it in a unique way. The children’s book will introduce the idea and be a story that you can revisit with your child anytime,” added Catherine Green.

Holiday season 2016 will be the first year the Adventure Santa kit is available for purchase to help other families spice up the holiday season. The kit, which includes a plush Santa doll wearing a backpack, 10 Adventure Santa note cards parents can customize, a copy of the book,The Story of Adventure Santa, and access to an online community where ideas can be shared, costs $29.99 and is available exclusively online at www.adventuresanta.com.

The Greens wrote the original story included in the kit, then turned it over to a professional children’s book author named Megan Borgert-Spaniol to polish it up. The illustrations are being drawn by Kim Gordon, an award-winning illustrator from Minneapolis.

“I’m very excited about this project. The message behind it. The purpose behind it. What we are hoping to help families do is really exciting for me and I think it can really make an impact – for both kids and parents alike,” said Catherine Green.

“We did a beta test last year with roughly 50 families we know and it went really well,” said Sean Green. “We brought together a group of our friends with kids for an adventure where Adventure Santa sent the kids into the backyard to hunt for candy canes, and once they had found all of them, they came back inside for cocoa. They all had a great time, and so did the adults!”

The feedback the project has received so far has been very positive. “My daughter, Maggie Lou, was 2 when she went on her first Adventure Santa trip and she had a lot of fun,” said her mother, Lindsay Fort of St. Paul.

The candy cane hunt wasn’t the only Adventure Santa activity the Forts participated in last year. Adventure Santa also went hiking with the family and rode around with them in the van throughout the holiday season.

“We also sent him to my kids’ cousins and some friends we have in Boston,” said Fort. “It was fun exchanging photos of what Adventure Santa was doing in other cities.”

According to the article, “Making time for kids? Study says quality trumps quantity,” published in the Washington Post in March 2015, there are concrete links between quality parent time, such as reading to a child, talking with them and otherwise engaging with them one-on-one, and a child’s future success.

“I think it is incredibly important for parents to do things with their kids. By spending time with them in their formative years, you are building a relationship that will make it easier to interact with them in the future,” said Sean Green.

“I want my kids to remember doing fun things when they were little, and I think a good way to do that is by letting them see us enjoying the things we do together too,” added Catherine Green.

This year, Adventure Santa is available exclusively online at www.AdventureSanta.com. The Greens hope the toy will do so well this season, they will be able to get it into mass distribution in 2017.